A well managed farmers’ organization : a high potential for tourism!

For the next two weeks, Edern and I will split up: he is going to Bohol and Mindanao, and Matthieu joined me to go to Dumaguete, Siquijor and Palawan.

Today, Matthieu and I had a meeting with Rico, the president of the farmers’ organization in Twin Lakes, 15 kilometers from Dumaguete. After 45 minutes at the back of Rico’s pick-up on a climbing road with a beautiful view on the sea, we talked with Victoria, Rico’s wife (Rico is not fluent in English). In the Twin Lakes area, 9 barangays (villages) have a People’s Organization (PO). In 2000, they created PENNAGMANNAKI, a federation of those 9 PO, and Rico is now the President. The PO of Rico’s barangay is called Balinsasayaw Twin Lakes Farmers Association and has 48 members. 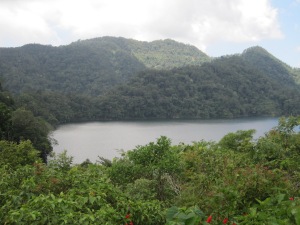 Every tourist must pay an entrance fee of Php 100 to the Department of Natural Resources (DENR). 25% go to the national DENR while the remaining 75% are allocated to the community according to the Annual Plan of the Committee composed by members of the local government, the DENR and NGOs. The Twin Lakes Park is a protected area because of its high biodiversity (endemic trees, monkeys, Philippines eagle…). Therefore, to protect the area, the DENR is employing inhabitants from the nearby villages. There are in charge of the cleaning and must make sure that there is no illegal cut of trees and hunting. The Balinsasayaw Association was trained a few years ago to monitor the biodiversity and provide data, which they now do twice a month. Moreover, trees plantations have been financed by the Energy Development Council. In 2007, the Twin Lakes park has been awarded by the United Nations Development Program (UNDP) for its well-managed conservation. 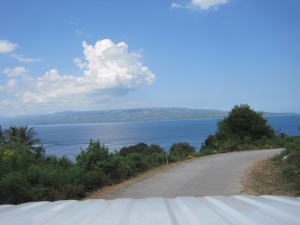 The road for the Twin Lakes

In 2011, 13674 tourists visited the park, which is already a lot. The community is benefitting from these visits through the restaurant they managed (which building has been paid by the local government) and the 2 kayaks and paddle boats they rent. We asked the monthly salary of a kayak employee: Php 2000 per month (40 euros), for working 6 days per week… This seems really small but it is better than nothing for farmers’ families that rely only on agriculture (and thus are dependent on the weather and harvests).

We found it very surprising that there has not been any training for the local community on guiding, as it is the first step we usually observe for a community-based tourism program. Victoria thinks this is a pity because the community knows a lot already on the local biodiversity, however they lack specific training and English skills. Most tourists travel with tours operators from Dumaguete that bring their own guide and food, and the community is not benefitting a lot from those visits. We went to Dumanguete to ask the DENR about these trainings. They told us that probably, the Committee who is allocating money from the entrance fees will include such trainings in next year’s Annual Plan. 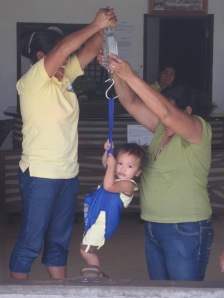 It is really interesting to see different cases of community-based tourism: in Pandan we saw that the local government was really involved, the community too, but they lacked marketing and tourists. In Olango, it was all the contrary. And with Balinsasayaw, we discovered a case where the community is ready, tourists are coming, but there is a lack of support from the government to help the community.